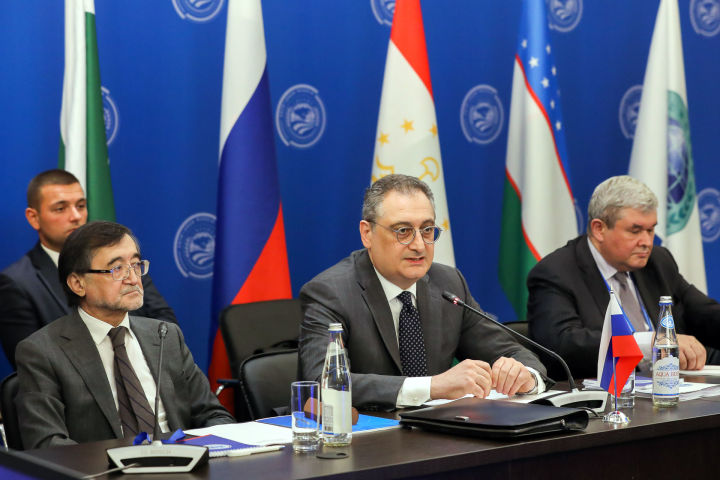 I am glad to welcome you to Moscow for the first Meeting of the SCO Council of National Coordinators under Russia’s Presidency of the Shanghai Cooperation Organisation in 2019-2020. We have a special attitude towards this demanding mission, and are ready for productive joint work in the interests of the comprehensive development of the multi-faceted SCO cooperation.

The SCO is becoming increasingly confident as one of the fundamental elements of an emerging polycentric world order, based on equal and indivisible security and sustainable development. Our Organisation, without exaggeration, is seen by the international community as a reliable and predictable partner.

The SCO’s vigorous activity is especially relevant today, amid the erosion of the strategic stability system, and individual countries’ aggressive trade and economic policies. Attempts are being made to impose their will and values ​​on other states, and in the case of the SCO, to undermine the unity of the Organisation, to discredit and isolate it in the international arena. You all are well aware of this.

Given these trends, Russia sees the further consolidation of the SCO member states as a priority. The SCO has substantial reserves for deepening foreign policy coordination and developing harmonised measures to counter the growing security, political and economic risks.

It is important to continue to further enhance the SCO’s role and prestige in international affairs. The meeting of the UN Security Council, scheduled for late September in New York, also presided over by Russia, “Cooperation between the United Nations and regional and subregional organisations in maintaining international peace and security: the contribution by the CSTO, CIS, SCO to combating terrorist threats,” is also expected to contribute to this task.

During the Russian presidency, we consider it necessary to focus on further improving the effectiveness of the fight against terrorism, extremism, drug trafficking, organised crime and information challenges. To achieve these goals, it is essential to improve the activities of the SCO Regional Anti-Terrorist Structure and expand its functional capabilities. The Russian side is ready for joint work with its partners toward the best arrangement and coordination of action on this track.

One of the key economic priorities is compiling a roadmap to increase the share of national currencies in mutual settlements, which is going to reduce our countries’ dependence on external financial instruments. We expect progress in the development of transport and logistics, infrastructure, digital economy, innovation and other industries. In this regard, working out a new version of the Programme of Multilateral Trade and Economic Cooperation is of particular importance.

In 2020, the 75th anniversary of Victory in the Great Patriotic War will be widely celebrated, with the SCO member states involved in some of the events. Invitations to attend the commemorative events in Moscow have already been sent to the heads of your states on behalf of the President of the Russian Federation.

The development of the SCO's international contacts with the CSTO, ASEAN, the CIS, as well as with other multilateral associations sharing our goals and principles, requires serious attention. We are confident that the establishment of official ties with the Eurasian Economic Union would be in the interests of the SCO.

Consideration should be given to working out an algorithm for interaction with the SCO observers and dialogue partners. And of course, a comprehensive substantive discussion about SCO expansion is due. We are ready to discuss these issues in detail during the upcoming consultations on international issues between deputy foreign ministers, which are to be held before the end of this year in Moscow.

The Council of National Coordinators is the most important component in the SCO cooperation mechanism, which ensures the implementation of the decisions made at high and top levels. At this stage, you are to provide the substantive content for the SCO heads of government meeting on 31 October -1 November in Tashkent, as well as to start preparations for the SCO summit in St Petersburg in July. I am sure that these objectives will be fully met.

I wish you successful and fruitful work.